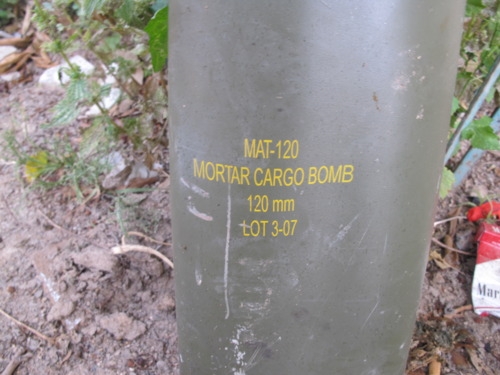 In April The New York Times and Human Rights Watch revealed that Libyan forces loyal to Muammar Gaddafi had used cluster bombs in attacks on residential areas in the western city of Misrata. The little-known cluster bomb turned out to be a MAT-120 mortar round that carries 21 submunitions up to a range of 5,500 to 6,800 meter.

With its MAT-120, Spanish company Instalaza was one of the first companies back in 2007 to win a contract on the potentially lucrative Libyan arms market, opening up after the lifting of decades-old international military sanctions. After years of isolation the West had become friends with the colonel and of course the military needed some major restyling – including new cluster bombs and fighter jets.

While you won’t expect a company to apologise so easily – “sorry that our bombs worked so well” – you could at least expect some more introspective attitude as your customer has again become the pariah of the world (of course everybody knew he never really changed).
Not Instalaza. It has gone on the offensive and is now claiming almost 40 million Euros from the Spanish government in compensation for future orders lost due to the banning of its mortar bomb, according to this week’s Jane’s Defence Weekly.

The MAT-120 was banned in July 2008 as Spain decided on a moratorium on cluster bombs. The British Daily Telegraph reported that the manufacturer stated that the weapons were sold to Libya in 2008, prior to the Spanish Government ratifying the Convention on Cluster Munitions. Having been outlawed since, the Government ordered the shutdown of the weapon’s production. Disagreeing on the fate of its bomb Instalaza still proudly shows the mortar on its website. But with no future customers and a company on the verge of collapse Instalaza now begs for money from the government.

PS: not only Khadaffi uses cluster bombs, also Obama does: a covert operation in Yemen in December 2009, long suspected, and confirmed late last year thanks to WikiLeaks.