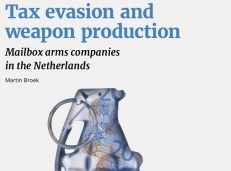 More than half of the top 100 biggest arms companies have a holding or establishment in the Netherlands. Which means that of every two dollars earned with weapon production, one is having the Netherlands backing up its financial structures.

Stop Wapenhandel checked the top-100 of global arms companies against Chamber of Commerce information and found large number of arms producing companies with shell companies established in the Netherlands. The Netherlands is notorious for its tax evasion possibilities. Published December 2015 in cooperation with Transnational Institute

Update: Nov. 2018 Stop Wapenhandel organised a debate in cooperation with the Amsterdams Vredes Initiatief (Amsterdam Peace Initiative) and members of the Amsterdam town council on tax evasion by arms companies in Amsterdam. See video (in Dutch)