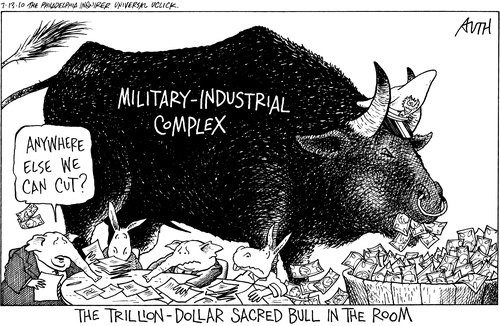 In the coming months decisions will be taken with long term consequences for military expenditure and arms production. The arms industry has been shifting parts of its production from swords to ploughshares recently to help producing the medical equipment needed to fight the corona virus. This was widely reported by the industry, press and by governments. But not all swords went to the forgery. The industry still produces weapons and production facilities that have been stopped as a consequence of lockdown have been reopened again as quick as possible. In India, industries from the US and Europe such as Boeing, Lockheed Martin and Airbus, are pressing to restart the production of military components even in this country in complete lockdown with a very vulnerable population.

Creative defence industrial minds play with the intelligence of their public. A futurologist of Airbus Defence and Space remarked the military industry is trained to quickly adapt on emergencies “which was in the corona crisis at the benefit of health care & society as a whole.” Maybe he thinks the public is not smart enough to see the enormous adaptations made in the running of supermarkets, hospitals, houses for the elderly and handicapped. We all have changed the running of our households, without military training.

A researcher at the conservative Wilfried Martens Centre in Brussels (one of the ten biggest global think tanks) expects less funds for EU military industry projects because of COVID and already asks that policymakers in Brussels and other EU capitals begin to reflect on how the pandemic is likely to affect security and defence, to minimise the risk of surprises. Aviation Week & Space Technology observes positive and negative perspectives – more of the first – for the defence industry, of an importance as much as after 9/11 and spurs the industry to “begin to position for as these play out in 2021 and beyond.” One of the most cynical is the expectation of state collapses in different parts of the world and the following regime challenge which can drag in outside interests.

In the United States the government is busy supporting the military industry. In April the Pentagon made starting prototyping easier for military projects to bolster the military industrial base. The federal government has ordered the industry’s 2.5 million employees to continue their work, based on the grounds of national security. Australia supports its defence industry because of COVID-19 effects. Seoul is also to introduce defence industry support measures, Jane’s Defence Weekly reports. The Norwegian Ministry of Defence has implemented support measures and is continuously assessing for more.

In the European Union, industry itself comes with proposals and is trying to influence post-COVID policy. Lobby organisation ADS (for 1100 businesses operating in the aerospace, defence, security and space sector) reports the UK government has a range of support facilities. Remarkable is the offering by two of the major European defence industries, Thales and Leonardo of free cyber security education to other enterprises promoting their positions yet in the future security sector.

The Netherlands has a defence and security lobby organisation, the Netherlands Industries for Defence and Security (NIVD). The NIVD is close to the Commission for Military Production at the Ministry of Economic Affairs and the Ministry of Defence. It has come with a packet of policies to help the industry such as earlier payments, military and security orders by the government to drive the economy, and faster decision making in Parliament.

Similar demands are made by the maritime/naval industry lobby (NMT), setting the agenda. The military industry and the Ministry of Defence have learned from the economic crises of 2008, when military expenditures also went down. In the midst of an upcoming economic crisis the Dutch Parliament will vote next week (most probably in favour) on a law which reserves € 20 billion for military materiel in the next five years. This will secure income for the military industry even in the meagre years expected, independent on governments to come. While in the UK there will be a much needed pause on the Defence plans as was also eloquently put forward by Andrew Smith of the Campaign Against Arms Trade: “This should be a time for reflection and re-evaluation of priorities in the aftermath of the COVID-19 crisis. Why is it that so many doctors and nurses can’t get basic protective equipment, yet the UK is still ploughing billions of pounds into aircraft carriers?”

NIDV and NMT are not only active on Dutch level, they also advise Dutch industry to make better use of the European defence industrial support mechanisms in the context of the European Defence Fund (see: NIVD, NMT). The European Commission recently opened a call for innovative military projects (not only weaponry) having € 160 million to distribute.

The arms industry is well positioned, because defence industries are often private but also close to states, because governments are by far the principle clients for military weaponry. The approximately $100 billion military market is thus limited to a few clients: Ministries of Defence, Homeland Security etc. Governments are depending on the military and security industries to develop military policies and have the tools to defend, wage war and project power. Because of this so-called essential security interests military production is excluded from free market tendering in major trade agreements like General Agreement on Tariffs and Trade, GATT.

Governments will have to find ways out of the economic downturn caused by the corona crisis, but using military acquisitions for this will limit budgets for support of the elderly, of worn out hospitals, and social support of those hit hardest by the corona crisis. It will also hamper the structural change away from a fossil fuel society and economy towards a sustainable future, which is necessary to slow down that other big crisis, the climate crisis. A form of Military Keynesianism is not in the interest of society at large. What the corona crisis has shown is how vulnerable even advanced and rich societies are. Thomas Piketty argues that to avoid the worst, a social state is needed, not a prison state. Let me add to this that not more defence industry is needed, but more medicine and social expenditure. Lets take position, the future is now.