With all eyes on Iran, developments in other parts of the conflict-torn region are ongoing almost outside the eyes of the public. Troops of Commander Haftar’s self-styled Libyan National Army (LNA, supported by the UAE, Saudi Arabia and Egypt) declared a final and decisive battle to take Tripoli last month. Fighting and shelling between the two sides of the conflict has been raging there since April, with neither side making much progress.

This week the LNA announced to have captured the strategic coastal city of Sirte from the UN-recognized Government of National Accord in Tripoli (GNA, supported by Turkey and Qatar). Last month the Panel of Experts published its annual report on arms sales to Libya. The results are not presented in a long read full of human interest to smoothly swallow it, but in a kind of institutionalised investigative research report with a length of almost 400 pages. Boring? No, but worrisome it is.

The annual study is based on UN resolution 1970 (2011) including an “arms embargo, which relates to arms and related materiel of all types, including weapons and ammunition, military vehicles and equipment, paramilitary equipment, and spare parts for the aforementioned, in addition to the provision of armed mercenary personnel. The arms embargo covers both arms entering and leaving Libya.”

Readers probably are most interested in the mentioning of the country they are living. However many countries are just listed in a list of letters sent by the Panel to a UN member state. And also letters sent to involved companies, like in the case of independent airline company ProAir Germany, most probably in connection to deliverance of “53.6 tons of ‘drone parts’ and other UAV components from Istanbul, Turkey, to Misrata between 27 May and 16 June 2019. For these flights, the aircraft were all chartered by the Turkish office of ProAir-CharterTransport GmbH132 and operated by Ukraine Air Alliance PJSC133 of Ukraine.”

Remarkable is that about half of the number of letters is not answered. Bulgaria e.g. received 5 and answered none. Presumably the letters will have been on the found Improvised Explosive Device (IED) of Bulgarian origin, mentioned in the text, but as no subject is given this remains unclear. Bulgaria is not the only European country neglecting the post by an official United Nations panel, also the Netherlands received five and answered none.

The United Arab Emirates (UAE) is one of the most mentioned countries in the report, and together with Jordan responsible for the majority of transfers to Khalifa Haftar’s Libyan National Army (LNA). The LNA intensified its offensive last year against Government in Tripoli (GNA) in Tripoli. “The majority of those arms were delivered quiet often openly, but repeatedly in non-compliance with paragraph 9 of resolution 1970 (2011),” the panel states. While the text is quiet concise, the facts may seem to be the ingredient for a spy thriller, illustrated as it is with photographs of spotted armed drones (involved in dropping explosive ordnance on civilian neighbourhoods), armoured vehicles, and UAE delivered Chinese 155 mm howitzer ammunition.

The report includes a table with so-called Damen Coast Guard Stan Patrol 1605 Class vessels with the names, weaponry mounted on them, and last known locations. According to the report they were donated to Libya in 2013. Early 2018 the Dutch investigative journalists Lighthouse reported the misuse of those Damen vessels by the Libyan authorities and a militia involved in smuggling of humans (see also). The vessels were unarmed on delivery so export was not in violation of arms export regulations. Although fitted with generic equipment mounts, which are particularly suitable for the mounting of light weapons. Late 2018 the Dutch Minister of Development Aid and Foreign Trade, Sigrid Kaag, stated that she would use the catch all clause to stop such sales when Damen plans a similar export in the future. 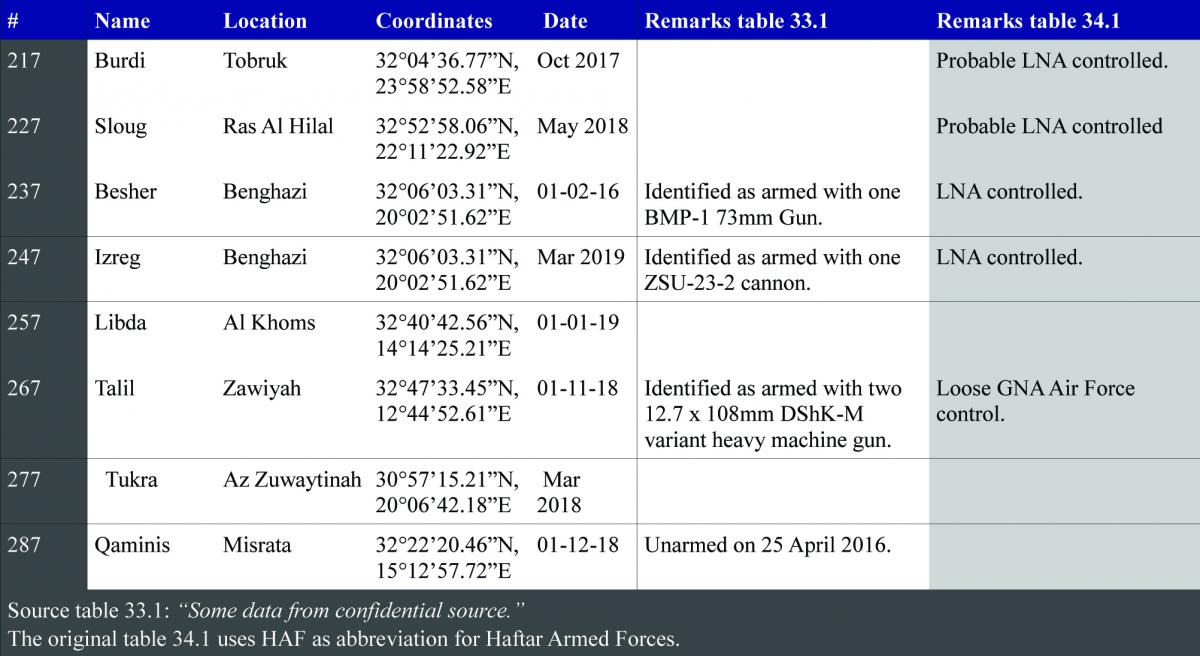 There is also another naval vessel delivered and named in the report. Here a Dutch company acted as middleman. The Alkarama offshore patrol vessel was bought by Russel Ventures Ltd. (trading as Van der Kamp Shipsales B.V. from Nissewaard) and sold the same day, according to Naval News for over six times the price it was bought for, to Universal Satcom Services FZE of the United Arab Emirates. This kind of price hike which must lead to raised eyebrows and questions about the nature of such a deal. The vessel was armed afterwards with one 40 mm cannon and two 20 mm cannons. In April 2019, when fighting between GNA and LNA surged, it was deployed by Haftar’s troops to protect oil infrastructure in Ras Lanuf the East of the country.

The Panel of experts report provides a supply chain on the Alkarama, which was kept deliberately opaque using a sequence of measures:

(a) the sale was previously agreed with Libya before purchase by the supplier;

(b) the shipping register was changed at each stage of the supply chain;

(c) a change of use declaration was made to deliberately disguise the vessel’s true purpose;

(d) a false declaration of demolition was made to Panama, the final flag registry of the vessel; and (e) a diversion en route was made from its declared port of destination of Alexandria, Egypt, to Benghazi.

It is remarkable this vessel was not an issue in the Dutch press or Parliament while it is heavenly armed and used in the civil war in Libya. The Damen vessels were discussed because of the work by Dutch journalists investigating the Dutch shipwharf. Van der Kamp Shipsales B.V. stayed so far under the radar. 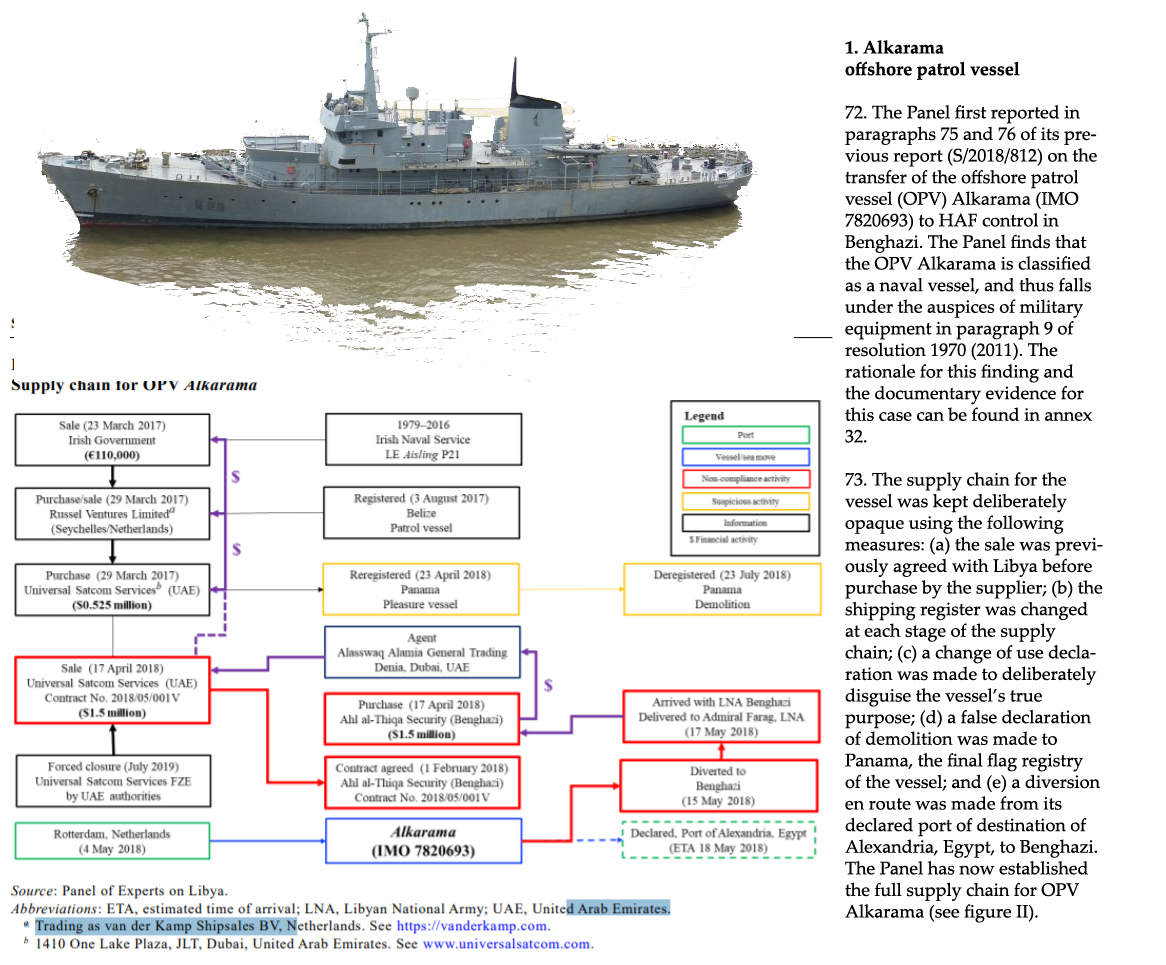