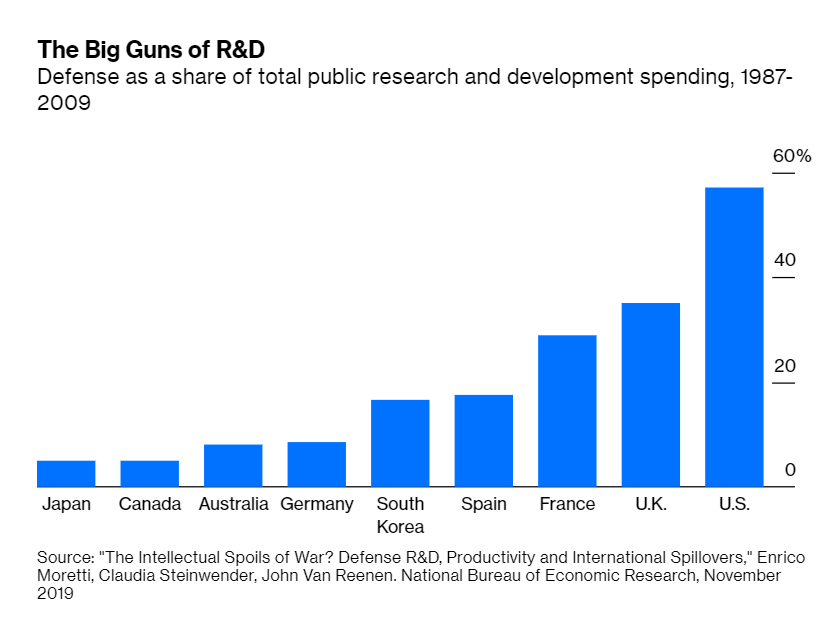 Early March, production lines in Italy and Japan for the F-35 Joint Strike Fighter closed because of corona. The virus affects even the world’s largest military program ever. Military power has its limits when facing a pandemic. Troops are brought home from foreign deployments such as Iraq and US military exercises like Defender 2020 are scaled down if not fully stopped. All of the approx. 5,000 naval and aviation personnel of the largest weapon system in the world, aircraft carrier Theodore Roosevelt, were brought ashore and put in quarantine, because a large number of personnel was infected. War Resisters International published a list of arms fairs which do not open their gates. The Underwater Defence Technology fair (part of the Damen submarine lobby) in the Netherlands is postponed from May to December.

The first major arms sale of Japan, due to be completed by May, has stalled because of the COVID-19 pandemic. In some places conflict parties are responding positively to a call by UN Secretary-General António Guterres to lay down weapons and fight life-threatening COVID-19 together. “These emerging ceasefires are still few, but a vital step in the right direction” states small arms control platform IANSA. But while in Colombia guerrilla organisation ELN says it will adhere to the cease fire, community organisers and human rights and environmental activists are more at risks of being killed by hitmen now that they stay at home.

Arms industries are asked to use their advanced production capabilities to construct badly needed ventilators for hospitals: General Electric workers went on strike to defend their jobs, but also to demand being involved in the production of this desperately needed equipment. In the UK a so-called VentilatorChallengeUK Consortium is created. Dutch civil/military wharf Damen initiated a consortium to develop a protective mask. Conversion from military to civil production seems to be possible overnight.

Military personal and equipment is supporting the civil medical sector. Hospital and amphibious ships supply extra intensive care beds and military medics are stationed at hospitals. Armed forces are transporting masks, patients and even deadly victims. Still the military can turn down a request when it considers its military tasks at risk, as was done in the Netherlands when a civil request for IC-beds aboard a specialised naval vessel was refused.

Helping to fight the corona virus can also strengthening the military establishment. One of the largest research institutes in the world is the US Defence Advanced Research Development Agency (DARPA). Of the US government research budget, 60 % went to the military in the period 1989-2009, and DARPA is the spider in the web. With an annual budget of 3.5 billion it is an institute which brought and continues to bring the world the most veil weaponry and military inventions. DARPA was quick to state that its Pandemic Prevention Program is seeking a new way to boost a body’s immunity to viruses. The situation is used to prevent budget reductions, like worded here: “Military medicine has long been a critically valuable source of research, insight, training and skill for the nation and now is no different. Yet even as leaders turn to the military for manpower, medics, and expertise, the Defense Department is engineering a reduction of that system. Following through on this plan would be a terrible mistake.”

Westerners look with horror to surveillance state China, but contact track and tracing apps are now openly discussed in a large number of Europe countries. In the UK secretive big data firm Palantir was contacted to develop apps for the National Health Service to fight the virus. The company is known for taking on defence contracts, including work for the Pentagon and the CIA in the US wars in Afghanistan and Iraq. In Italy, the military is guarding super markets (and UK troops are exercising for this task), and drones fly to control the population.

While social distancing is the norm and many events are cancelled, one of Europe’s biggest civil military companies will have its Annual General Meeting on April 16 in Amsterdam. The board (from France, UK, Germany, US, Spain) of the civil military company is obliged under Dutch law to organise a physical meeting within 6 months after closing of the book year. Shareholders are asked to consider to participate only virtually and if they do participate in person, to respect social distancing. It is unclear if virtual questions can be taken and also if virtual meetings will become the norm in the future, which will limit critical shareholder actions. Like many other companies (such as French state-backed Safran) Airbus already scrapped its shareholder dividend as the corona virus outbreak disrupts production and demand. 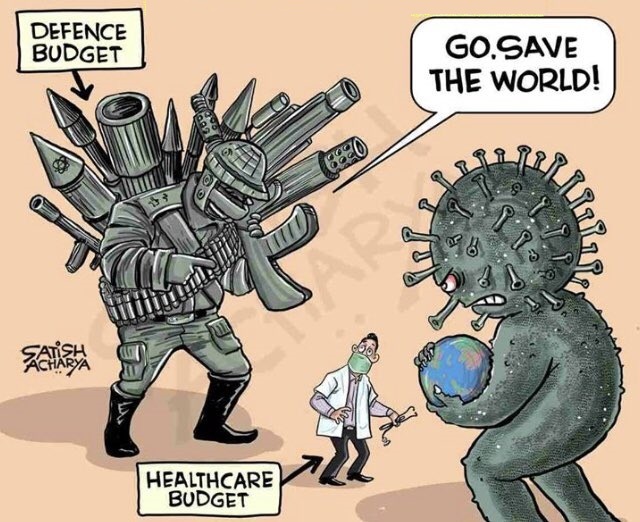 In Spain, Airbus continues ‘some key activities‘ like on military and space equipment. “They remain essential” according to the company’s website.

Also in the US the arms industry is considered ‘essential’. “There are always concerns, but right now I have no major delays, and that’s due to fantastic people thinking creatively” the US Defense assistant secretary for acquisition, technology and logistics said with regard to corona impacts to US Air Force weapons development. And soon after F-35 plants stopped working they were reopened.

The Dutch naval industry lobbies for quickening Dutch naval acquisitions to cushion the effects of corona and fill order books.

Not that all arms industries are ’too big to fail’ but some are strategically too important. They will be bailed out, even when it was their policy to have no financial backing for difficult times. Boeing has returned nearly $50 billion to its shareholders over the past five years while investing far less. “Now it wants taxpayers to cough up tens of billions for a bailout?” Aviation Week rhetorically asks, also noting that Boeing for example “sent 96% of free cash flow to shareholders over the last five years.” Remarkable is that Airbus wants to solve the crisis without a Government bailout.

The corona crisis may be a opportunity to make clear that not the military, but health care is essential for our safety. Intensive care beds are the platforms we need, not tanks, fighter jets or naval vessels. The crisis shows we need a new security paradigm. But the military also regards the crisis as an opportunity: to show the need for weapons and apps to control citizens, and to continue military domination. The coin can fall on two sides, and it would be naive to think this crises is not used like all crisis are, as a chance for change. So lets work for the the best change.

William Barber and Phyllis Bennis were quick to start the debate in major American weekly Newsweek under the title ‘To Fight This Pandemic, We Need to Take Over the Military’s Resources—Not the Other Way Around.’ This title summarised their main message: “this crisis must not be led by military commanders, but by doctors and public health experts empowered, among other things, to redirect military property.” A viewpoint of importance because the military continues to push for resources under their control: “We should not be surprised that recent military research and development into medical technologies for the next generation of warfare could be accelerated and applied in tackling COVID-19 and future pandemics” military medics wrote in an article to keep the initiative at their side.

Daryl Kimball of the Arms Control Association points to the fact that policical choice in the past have been wrong: “Unfortunately, US spending priorities and modes of thinking about security have been become increasingly defined in military terms. Congress provided a record $746 billion for national defense in fiscal year 2020.”

The International Peace Bureau called on the G20 and all nations around the world to invest in healthcare, not militarization and pointed to a wide range of issues like, the warning of the World Health Organisation that the world is facing a shortage of 18 million healthcare workers by 2030. IPB also points out that the virus shows the urgent need for countries to work together instead of develop enmity. 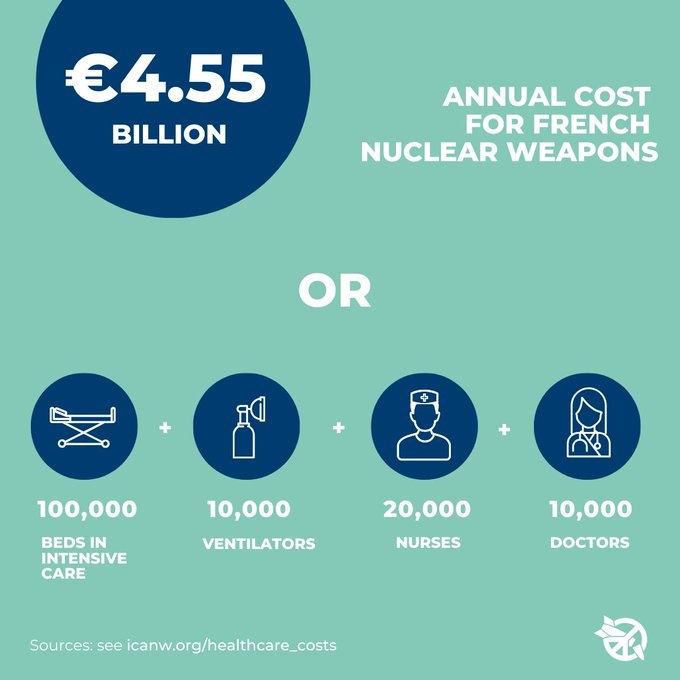 Another Nobel Peace Prize winner, ICANW, publishes a series of infographics showing what can be paid on healthcare by funds now going to nuclear weapons. The coronavirus is even hampering arms control negotiations, also on the nuclear front.

Meanwhile the European Commission still disagrees with the Finish presidency to lower the cost of the European Defence Fund. There are more pressing needs now for the proposed EDF billions, although some annalists consider the instability that might be caused by the pandemic as an extra reason to beef up European Defence and NATO.

In the Newsweek article, Barber and Bennis suggest to cancel “just one multi-billion military contract with private corporations — like the $29 billion contract with Lockheed-Martin to build new warplanes to carry out more air strikes.” This would create the funds to “immediately and dramatically expand health care to millions living in coronavirus hot spots” they state. The market is not expecting this choice to happen. After the Senate passage of a $2 trillion economic stimulus package, Lockheed shares were trading higher.