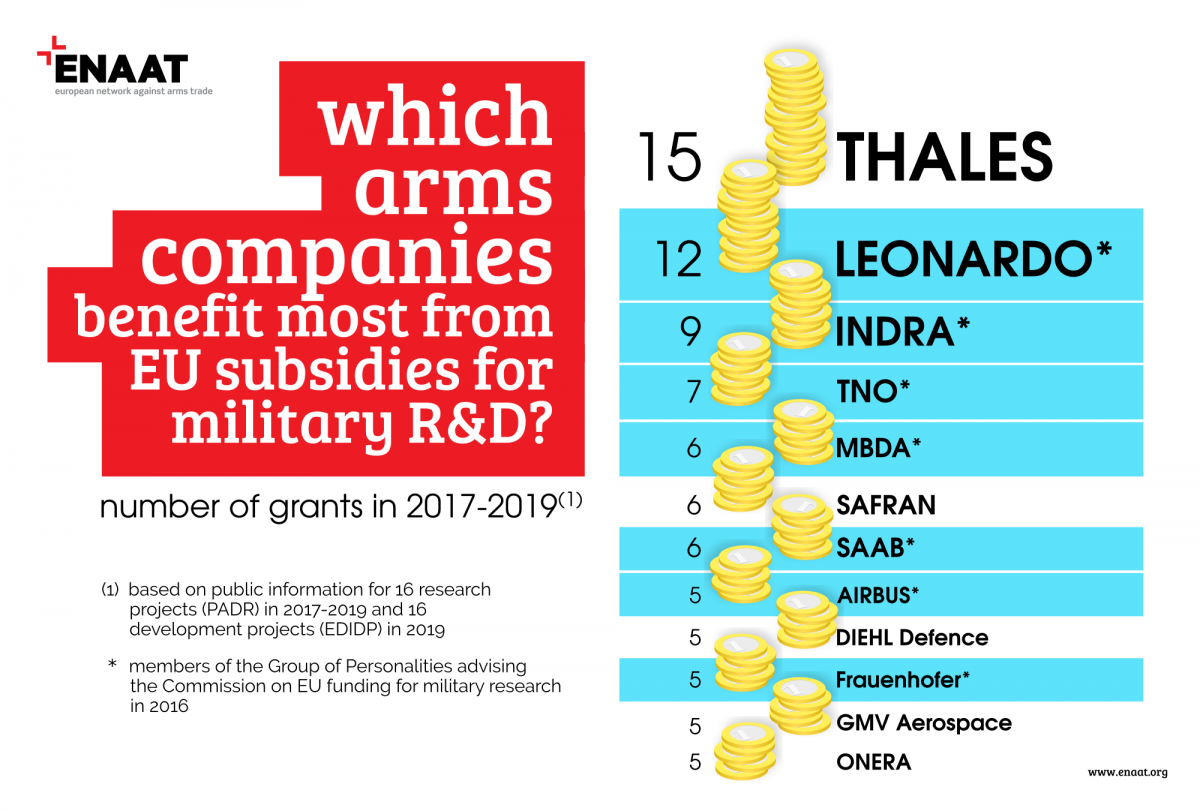 This year the European Defence Fund (EDF) will take off, handing out €8 billion in funding for military research and development of new arms and military technologies during the EU budget cycle 2021-2027. Under two preparatory programmes the EU already gave €590 million in funding for research and development in the years 2017-2020. Research institute TNO has been the main Dutch beneficiary, after it was heavily involved in the lobby that led to the establishment of the EDF.

Ten Dutch companies have participated in projects financed under the Preparatory Action for Defence Research (PADR) and the first part of the European Defence Industrial Development Programme (EDIDP). For the second part of EDIDP another five Dutch participations are expected. Because the EU lags behind in publishing information on the funded projects, not all Dutch companies receiving funding are known. It is clear, however, that TNO is the most important Dutch beneficiary, participating in at least seven funded projects.

For the OCEAN2020 project TNO is one of the 42 (!) partners from 15 EU countries in a consortium led by Italian arms giant Leonardo. It is the largest EU military research project so far, receiving over €35 million funding. The project is aimed at the integration of unmanned naval platforms (drones) in maritime surveillance and interdiction missions.

Dutch naval shipbuilder Damen leads the project SEA Defence. The consortium also includes Dutch maritime research institute MARIN, as well as many large European military shipbuilding companies (Naval Group, Navantia, SAAB Kockums, thyssenkrupp Marine Systems, Lürssen Defence). The project was launched with an online meeting in attendance of representatives of the European Commission and participating EU member states. SEA Defence must produce “a roadmap of technologies to be included in next generation of naval platforms and pursued in further European development programmes” and as such pave the way for future profit opportunities for the military industry.

TNO, the Netherlands Organisation for applied scientific research, was founded in 1932 by the state as an independent organisation to support authorities and companies with knowledge and research. It is active in a broad range of research fields, including energy, health, sustainability, transport, ICT and defence and security. Though it is independent it is closely linked to the government, especially in the field of defence and security, where it acts as an innovator for the Ministry of Defence and is entrusted with some government responsibilities.

In the field of defence and security TNO works on several focus areas, including the development of new arms and technologies, the planning of military operations, information and sensor systems and homeland security. Members of TNO’s Council for Defence Research, which determines its policy regarding defence research, are appointed by Royal Decree, and includes e.g. the present Director Plans at the Ministry of Defence.

TNO played a leading role in the lobby that was very influential in shaping EU policies on funding for military research and the development of new arms and military technologies. CEO Paul de Krom of TNO, former State Secretary for Social Affairs and Employment, was part of the Group of Personalities that wrote the advisory report for the European Commission on funding for military research and technology (R&T). The EU adopted almost all the proposals from this report, which resulted in the establishment of the EDF.

This is not something new. TNO was equally involved in official advisory bodies that paved the way for EU funding for security research. Unsurprisingly, it has also been one of the main beneficiaries of such funding. According to Statewatch TNO got €30 million for its participation in 54 projects under the Horizon 2020 programme (2014-2020). With this, it is the second largest recipient of funding for security research, after the German research institute Fraunhofer, but ahead of large arms corporations as Thales and Airbus. TNO for example led the controversial SAFIRE project, aimed at developing models to combat radicalization, for which it cooperated with the Israeli International Counter-Terrorism Academy and the RAND corporation.

The EU regulation to establish the European Defence Fund stipulates that it should promote “the integration and strengthening of the global competitiveness of the European defence technological and industrial base”. In other words, it aims at expanding the European arms industry and its role on the global arms market, which means more arms exports to countries outside the EU. Militarisation of the EU and an increase in arms exports go hand in hand, to the benefit of the industry that helped shape these policies. Next to TNO the largest beneficiaries of the first rounds of funding, under PADR and EDIDP, are other companies that were part of the Group of Personalities, including Leonardo, SAAB and Thales.

Meanwhile, the NIDV closely cooperates with the government in supporting Dutch companies to get their share of this EU military funding, having set the objective of ending in the top 10 of countries receiving EDF money. They have organised several meetings and webinars to help Dutch companies in applying for funding.

The Ministries of Defence and Economic Affairs have established an Interdepartemental Coordination Group for European Defence Cooperation, in which the NIDV is represented, and have appointed former commander of the armed forces Tom Middendorp as Special Representative to promote the interests of the Dutch industry on an EU level. The Ministry of Economic Affairs has also made €20 million available to co-finance EDF projects with Dutch participation in the next three years. It is expected that the Ministry of Defence will add another €60 million to this, having already cofinanced the SEA Defence project.

Billions of EU money will flow to TNO and other military research institutes and arms companies for the development of new military technology and equipment, furthering the militarisation of Europe and leading to more arms exports. Increasingly, EU arms export regulations are seen as obstacles to the expansion of the European arms industry.