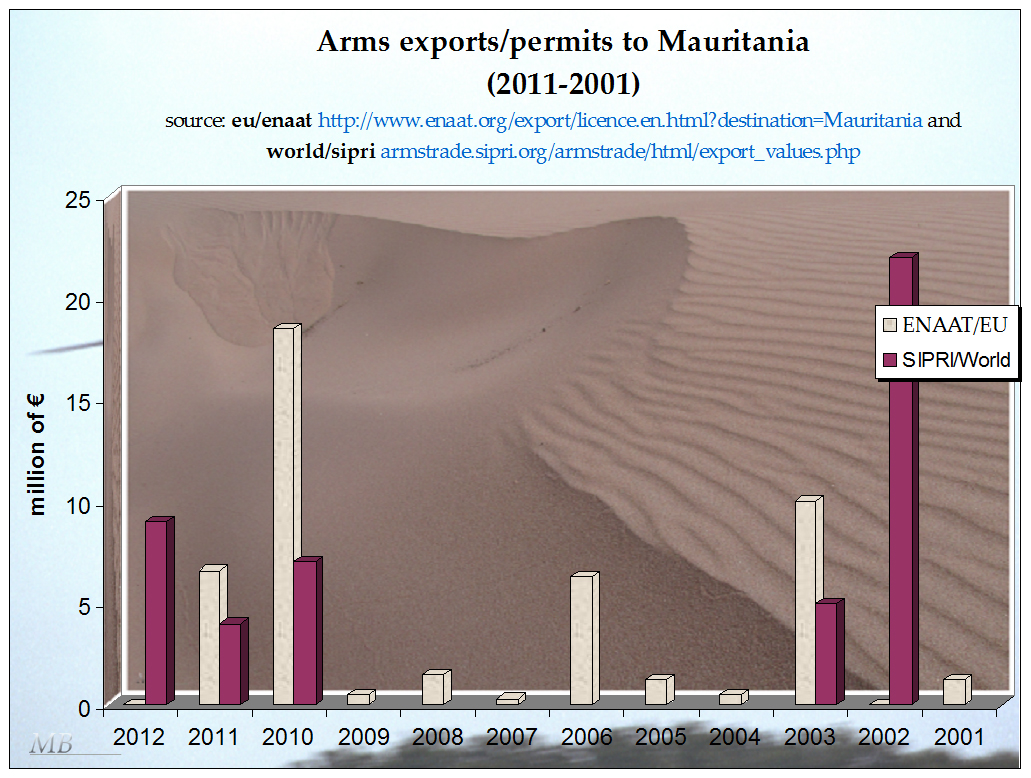 Mauritania can hardly be called a hot spot for international arms traders. Although its military expenditure – almost 4 percent of Gross Domestic Product (GDP) – is a real burden for the desert country, in absolute figures the 116 (2009) million US dollars is less than e.g. the costs of one Dutch offshore patrol vessel. Much of it has to be used for salaries and buildings. Mauritania is the kid on the arms bazaar.

The small military budget is hardly a surprise when you look at the economic situation of the country in general. Mauritania is most of all a vast territory of desert, with two cities on the coast and some smaller villages inland. It is primarily known by its iron ore mines in the east (Zouerate) and its rich fishing grounds, its bird migration area’s, its dependence on food donations and its black slave labor.

In Mauritania, about 20% of the population lives on less than US$ 1.25 per day. The Gross Domestic Product (GDP) is € 3.2 billion (about half of the annual Dutch spending on Defence) and results in € 888 per capita. Mauritania is among the poorest countries in the world.

However, the miserable economic situation did not prevent the Mauritanian government to shop at the Paris Air Show, where arms producers exhibit their gear. According to Jane’s Defence Weekly (26/06/13), Mauritania signed a contract in Paris with Augusta/Westland, for the purchase of an undisclosed number of so called AW-109 Powerhelicopters. It was not the first big military acquisition of recent years. In 2009, Mauritania was seen by France as an important country to fight Al-Qaeda in the Islamic Maghreb (AQIM) and so arms transfers began. This French vision was revealed from a secret cable(11/01/2010) by the US embassy in Paris. In the Mauritanian capital Noackchot it was decided to actively cooperate with the Africa Command of the US (AFRICOM). Mauritania was even home country for the most important international special forces exercise, Flintlock, in 2013.

France is by far the most important source of Mauritanian arms. Of the European sales worth € 47 million, (2001-2011) almost sixty percent or € 27 million is sold by Paris. SIPRI mentions huge Chinese sales earlier this century valued € 18.3 million. This included a patrol craft and two 2 French helicopters of the Panther Z-9 type, build by the Chinese firm HarbinAircraft Manufacturing Corporation (Hafei), on a license obtained from Eurocopter. Other major deliverances came from Poland (tanks 2002), Brasil (trainer aircraft, 2012). France also exported five trainer aircraft and tanks (or armoured vehicles) in 2010-2012.

About half of all of the deliveries took place in the last three years. The political situation in the region is the major drive behind it. SIPRI states the five French trainer aircraft are sold because of the struggle against AQIM. Jeremy Binnie, the Weekly’s Africa and Middle East correspondent, states: “In recent years Mauritania has been developing its ability to counter threats spilling over from neighbouring Mali by acquiring light attack aircraft in the form of four Embraer EMB- 312 Tucanos – which were transferred from France between 2010 and 2011 – and an undisclosed number of new EMB-314 Super Tucanos, the first of which was handed over in October 2012.”

The sales to Mauritania started because of the contra guerilla operations against AQIM in the Mauritanian desert around 2009, but were beefed up since chaos broke out in neighbouring Mali last year. As such the civil war in Libya, the resulting destruction of the balance of power in Mali in favour of the Tuaregs, and the reaction on the loose of control by a coup d’etat in Bamako, the Malinese capital, opened a new front for arms deals. The civil war in Libya leaves its traces also in Mauritania. These arms transfers can grow as long as oilfields off the coast in Mauritania are delivering.

Written with the support of Fonds Vredesprojecten