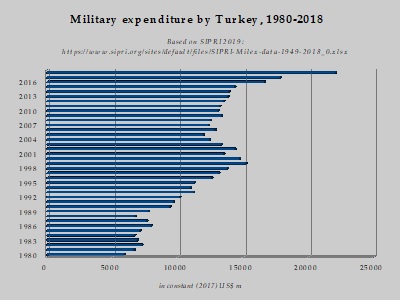 Turkish foreign and military policy becomes rapidly more assertive and autonomous. It can be seen in the Syria policy from the invasion to the current armed stand-off, in trafficking weapons to Libyan allies, in obstructing EU collaboration with NATO and in President Erdogan concluding agreements on defence industrial cooperation with other countries, from Malaysia to Senegal and Ukraine, on a scale even remarkable for a regional power.

When Turkey invaded Northern Syria, starting in October 2019, one of the issues which surfaced was the alleged independence of the country from arms imports because it had established a domestic arms industry. However the state of this industry must not be over-estimated.

Before looking into weapon programs first a look over the shoulder. The present state of the Turkish defence industry is not a miracle made by Ankara, but the result of an intentional policy by NATO. In 1993, the Dutch antimilitarist research collective AMOK investigated arms exports and support for the Turkish armed forces and support for the defence-industry (published as “De Turkije-connectie” also published in English and German).

Turkey was seen at the time as one of NATO’s Less Developed Defence Industry (LDDI) countries. NATO-countries like the US, France, Germany, Italy, Netherlands, Spain and UK, with more advanced armed forces and defence industries, commonly decided to help building the Turkish defence industry. NATO stands at the foundation of the growth of Turkish military industry. Nowadays Ankara sells its drones to for example Qatar.

But it is not solely NATO, it is also Turkey itself which made a difference. It established an organisation and infrastructure for defence production and the Under Secretariat for Defence Industries. Much of the military industries established in the eighties still exist until today.

The creation of a infrastructure and higher budgets for downseized armed forces however has not made Turkey an independent manufacturer of armament. Although Turkish officials claim the Turkish defence industry has developed vehicle this or aircraft that on its own, most often it is using western technology or patented knowledge to build the home grown weaponry.

Last year a report was published by the Rojava Information Center (based in north east Syria) on the involvement of Western arms companies in Turkish military industrial build up. The writers unmask the home grown Altay tank as one with huge involvement of German Rheinmetall, doing whatever possible to evade arms control mechanisms. The report also mentions: Thales technology for the Turkish Göktürk spy satellite; MBDA which owns the Turkish defense company Eurosam and the contract Eurosam was awarded for the definition study of the future Turkish Long Range Air and Missile Defence System; and Leonardo which operated a recently expanded subsidiary company in Turkey under the name of Selex ES Elektronik Turkey.

It is not easy to become an independent arms producer. Recently French engine producer Safran stated that France is one of four countries (the others US, Russia and the UK) able to develop fighter jet engines. Only this limited group can independently produce fighter jets. Even China still struggles, despite its seize and technological input from Russia.

When early January Turkish F-16’s took off from Incirlik airbase – as part of the armed confrontation near Idlib – the fighters were propulsed by engines of General Electric, the F110 129 which are tested, overhauled and assembled at Turkish TEI. The role TEI plays is part of its policy with the aim “of becoming an engine manufacturer.” Turkish Aerospace Industries is co-producing F-16’s at its plant, but that does not mean it builds the whole plane and weaponry. It has also a role in the F-35, but that role is meeting hurdles, because Turkish acquisition of Russian missile defence equipment complicates it cooperation with the US (see F35.com or table here for participating companies at an earlier stage). It is still dependent on technology from the US and others.

Turkey – with a military budget larger than Spain and almost as large as that of Italy – does not stop here. It has its own fighter jet project, the TF-X. Rolls-Royce made an offer to provide the engine, according to Turkish leading daily Hürriyet in September 2019. But in December, the US$ 132 million deal was on hold, because of differences of opinion on technology transfer.

Ankara also has eyes on cooperation in the new UK fighter jet, the Tempest: “Sweden, Japan, Italy and Turkey have been among the countries touted as being potential partners for a program aimed at seeing the first aircraft flying around 2035,” well informed Defense News stated in July 2019 (also with some Dutch involvement according to Euractive). It depends on how such cooperation develops what will be the contribution to Turkish growing independence concerning fighter aircraft.

The UK changed its policy on Turkey recently, following the recent incursion by the Turkish military in north east Syria. The UK in line with EU advise grants “no further export licences to Turkey for items which might be used in military operations in Syria,” and Open general export licences (OGEL) and Open general trade control licences (OGTCL) where reviewed. This is in line with an EU-advise followed by the majority of the European Union member states. The Dutch Ministry of Foreign Affairs wrote also that Turkey was removed from the list of countries falling under such open licenses. But Turkey is a major customer for EU arms and its not the first time and will not be the last time the country is sanctioned. The German government licensed already some minor military deliverances to Turkey.

It is clear the Turkish state and its military have a long time program to develop itself as a regional power. Seen its assertive policy in the midst of one of the most destabilized regions Turkey may be an attractive market for arms. However it would wiser to seal this market off and not quickly reopen it at the first opportunity. It is rather easy to help build a defence industry, compared to the difficulties to reign it in when is already established. As long as Turkey needs military tech from abroad this possibility however still exist.