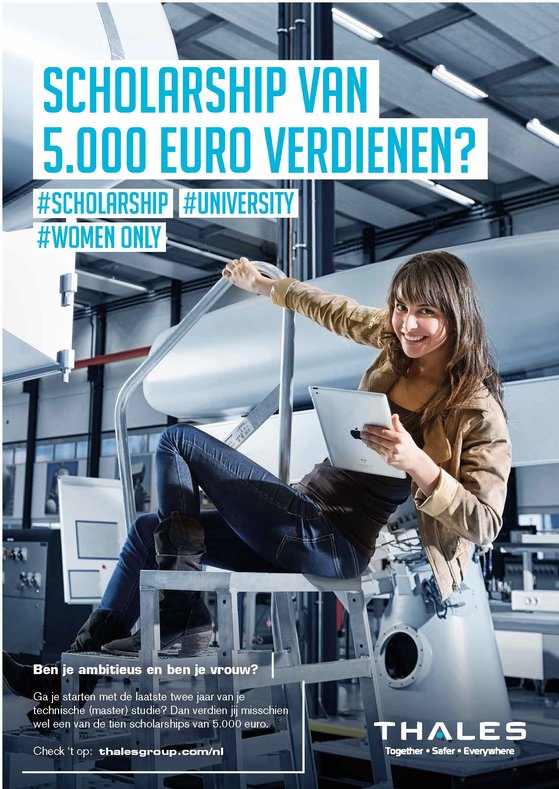 The Dutch military turns to children as young as 15 years of age to attract new personnel to its ranks. The military industry is also interested in youngsters, to recruit new skilled labour for its research, development and production facilities. They are actively linking up with technical universities to find students to fulfill staff positions. The Dutch defence industry is not producing simple bullets and handguns but specializes in state of the art military technology. Such as naval vessels, fitted with guns from abroad but with Dutch fire control, sensors and combat data management systems.
Modern aircraft such as the F-35 (Joint Strike Fighter) are also equipped with Dutch technology. The Netherlands also develops nanotechnology, biometrics, information technology etc. as used in new weapon systems. Almost every Dutch university has a program which is connected to the military or to the defence industry. This text will focus on Thales Nederland and the technical universities.

Thales Nederland is one of the major Dutch military manufacturers and producing state-of-the-art hightec equipment of world class. It has its main establishment in Hengelo and is located close to the technology University Twente (UT). This institute was established in the early sixties as part of the Dutch industrial policy after the Second World War, and meant to educate a highly skilled labour force. In a recent publication Herman Hazewinkel, chair of the University Fund, writes that the establishing parties of the University Fund, like producers of military technology Thales (previously Hollandse Signaal Apparaten) and TenCate, had a forward looking attitude for that time. Not only did they they establish an educational institution, they also created an innovative base. That the U.S. elite forces – in the sense of most skilled military, not of behaviour – is using Dutch armour developed by TenCate, is a direct result of this.

In the same publication of the University Fund CEO Gerben Edelijn of Thales Nederland – a graduate of the TU on electrical engineering – writes on the most tangible project of his company with the TU. It is the T-Xchange, a joint venture focussing on capitalizing serious gaming as a body of knowledge. Apart from this, there are at least ten other programs of cooperation. Moreover, employees of Thales are actively involved in education and research at the TU. Thales needs the TU ’to fulfill its annual 100 apprenticeships and graduate positions,’ in Hengelo, in the words of Edelijn. The company is actively looking for students and knowledge, of which many examples can be found on the TU Twente website.

The TU of Delft is well-known for its aircraft development. This old TU, already established in the 19th century, is a permanent supplier of students to Fort Worth, who work at the F-35 project. Thales is also present in Delft with a department for Research & Development on radar technology and radar systems (its military core business), with approximately 25 employees and working in close cooperation with the University. The company also has a Securtiy-Innovation lab (SI-lab) in Delft as part of the T-Xchange program. Until 2010 Thales Nederland, the TU Delft, the University of Amsterdam (UVA) and the Netherlands Organization for Applied Scientific Research (TNO) did run a common program on decision making processes as a key element of modern warfare. It was funded by the Dutch government (SenterNovem, grant number BSIK03024) and useable for civil applications – such as traffic lights – but also for military decision-making. The program brought together a range of institutes, government and defence industries.

The TU Eindhoven (TUE) is established in the late fifties as the second technical university (high school at the time) in the Netherlands. It is located near the former Philips factory and the – nowadays disappeared – car maker DAF. It was part of a plan tho create a technological centre in the southern part of the Netherlands. The plan has been successful: Around Eindhoven a so-called Brainport has been developed since. It includes big names such as ASML, and Fokker Landing Gear in Helmond which makes the tailhook for the F-35.
Thales has a small department in Eindhoven too, Thales Cryogenics (+/- 90 employees). This establishment is focussing on the development of cryogenic cooltechnics, used e.g. in image intensifiers for soldiers, but also useable in satellite technology. Recently Thales signed a Memorandum of Understanding with Safran to cooperate on the issue of future defence systems. The TUE provides knowledge input on armoured glass to reduce weight of vessels and vehicles and to improve protection against electromagnetic radiation, together with several companies (Dutch and French), TNO and the Ministry of Defence.

Earlier this year the Japanese paper Yomiuri Shimbun reported a deep-rooted resistance among Japanese universities aiding military research. This resistance is a response to the policy of the Ministry of Defense, against a backdrop of growing sophistication in the use of technology in defence equipment and concerns that Japan will fall behind the rest of the world if it does not conduct research on cutting-edge technologies. The protest even reached the Wall Street Journal.

In the past, all TU’s in the Netherlands also had groups discussing the ethics of military production. Hardly any of these groups is still active. Connected to the Delft University, there is a number of organizations which are actively discussing ethics, sustainable development, the positive use of technology, and crisis response. But the issue of developing weapon has disappeared from the debate agenda. The Peace Centre of the TUE was a major institute to discuss military engineering, the military and conflict. But the last symposium of the PC was in 2014, its last publication, officially published three time a year, appeared in 2013. There is still the Peace Research Foundation. Although covering a broad area of peace research, views on arms trade and military production are limited to new juridical regulation like the Arms Trade Treaty. They also do not deal with the Military Industrial Complex (MIC) of which universities are a part. Polemologist Leon Wecke noticed in 2009 that the MIC is seldom mentioned in scientific circles. It is high time that arms production, R&D, acquisitions, and arms trade control are brought back into the heart of peace research.