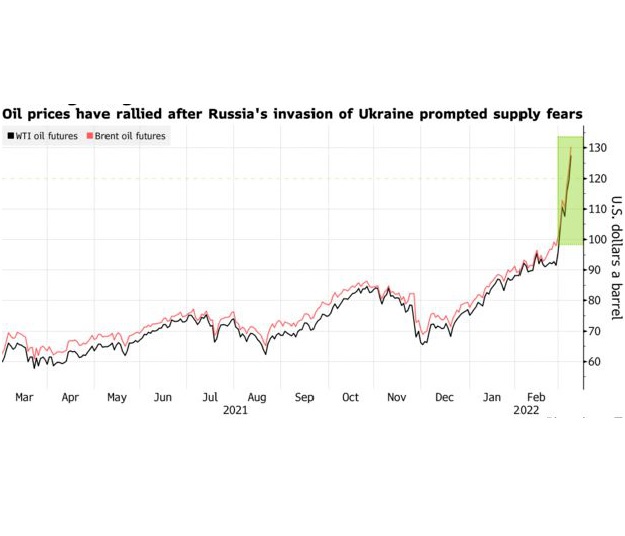 One of the classic peace movement slogans is No blood for oil. Many wars of the past decades are connected to oil rich regions. The current war by Russia is financed by petrodollars. How strong this connection is shows this simple math: a dollar price difference comes with an extra or cut of $2 billion in income for Russia. This income gives Russia room to manoeuvre by for example buying military technology abroad, even more so with the current high prices.

Scientist Emma Ashford developed a theory that war for oil is not happening often. She had to go eighty years back to collect just two cases: the Japanese occupation of oil rich Indonesia in World War II and the annexation of tiny but oil rich Kuwait by Iraq in 1990. To control the fossil fuel resources, other methods than open conflict are more easy.

It is not war for oil but arms for oil. The top-10 list of arms importing countries is filled with oil rich and/or dependent (10%+ of BBP comes from oil) countries, like Saudi Arabia and the UAE, Qatar and Algeria, but also Australia and China fit in one or more categories as defined by Ashford. China produces a large amount of oil, but because of the size of its economy this is far from enough for its total consumption. Major military powers like Russia and the United States are not listed because they produce weapons at home and are largely independent from imports.

Ashford concludes, measuring SIPRI figures over a long period, that oil wealthy states “though a relatively small proportion of all states globally, they have been well represented among top arms importers, both during the Cold War and after.” She investigates this relationship in the chapter Resource arms racing; oil wealth and military power. Below the table 10 observations she made.

1 The link between oil wealth and military expenditures and arms acquisitions has been considered true for so long that it has not been tested. Analysis shows there is little doubt it is an important factor. Oil-wealthy states spend disproportionate more on the military in absolute figures (oil rich have a much bigger pie to share) and as a share of government expenditure in oil rich autocracies.

2 Oil rich countries wage war more often than countries who are not. War and preparation for war is not hindered by domestic pressures for priorities; substantial budgetary trade-offs are not needed. It might be described as “resource arms racing.” As oil prices rise, so does military spending, the data show.

3 Arms races in regions rich of oil drag along non-petrostates which raise military budgets in response to their neighbours. A chain reaction shows how this may work: Riyad buys arms to be able to confront Teheran. This triggers Israel to further enhance its arsenal. Followed by escalation in Syria, Jordan and Egypt which ripples through to Turkey and Iraq.

4 There are limits how much military might wealth can create; high military spending does not make a state automatically military capable. Tasks must be trained, executed and embedded in an organization. Those structures have the risk to be weak in oil rich states, because often the easily available wealth leads to the lesser need of an effective state apparatuses. These states are often ruled by a tiny elite.

5 Oil prices are volatile. When the price is high the oil rich state can buy a lot of weapons on the world market. This shows to be an easier direction than visa-versa. Top brass does not like cuts. This leads to a disproportional spending on the military when oil prices collapses.

6 Oil rich states spend disproportional on the military and are often led by a small elite which is over confident in the capacity to fight wars and achieve victory at low cost. Moscow and Ryad have shown it is easy to miscalculate when deciding to start a war.

7 In 2001 the price for oil was $28 per barrel and in 2008 $158. This price enabled Russia to double military spending during Putin’s first term. The Russian-Georgina War showed Russia had also to improve fighting capabilities in the fields of personnel, tactical and strategic capabilities and technology sophistication. This was not helped by the fall of oil prices in 2014. The military budget was cut by 10 percent in 2014 (largely impacting arms procurement and development). An increase came in 2022.

8 More than 75 percent of insurgencies receive external support. Oil rich countries are more likely to support rebel groups or friendly governments. Of the 3,948 cases of external proxy support between 1965 and 2012 oil wealthy states were responsible for 25 percent of cases while they make up for 9 percent of all countries. In this respect they act similar to major powers.

9 Arms sales make oil rich countries dependent on the source of supply for training, overhaul, spare parts etc. But is is also part of a mechanism by major powers to control the financial resources of the petrostates. The consequential military relationship can also be use to ask for more production when prices go up with more military support in return. (See for that debate e.g. Oil Money by David M. Wright)

10 Russia, Saudi Arabia and the US, with a combined oil production of 40 percent of global production, are prepared to wage war two times as easy as nations who are not oil rich. They are less vulnerable to sanctions. In general, countries with large amounts take the decision to wage war easier, also because they do not have to fear sanctions.

What should this mean for arms export policies? Are the disproportional military expenditures just an opportunity for weapon producers? Even when oil rich countries support proxies easier and involvement in violent conflict is much higher? It seems most nations are more eager to support those countries with arms exports (and re-cash oil revenues) than to limit exports to dangerous oil rich areas.

Ashford wrote her book before Russia invaded Ukraine. That is before the price of fossil fuels skyrocketed because of this war. Fossil fuel sanctions against Russia create a higher price and extra income for the Putin clique to pay military, mercenaries, arms production and import of sophisticated technology it is lacking because of the embargo from Western sources. It also makes life in Europe so expensive that internal tension and troubles must be expected this winter.

Unless countries extremely speed up their energy saving and renewable production, ending imports from Russia will mean replacement by suppliers from gas and oil rich Middle Eastern autocrat regimes (waging also horrible wars), by shale extraction, and even by more polluting uranium and coal. War for oil may be rare, but energy supplies and war are closely connected. Influencing the price of oil and gas is may be a more important weapon than the supply of energy.