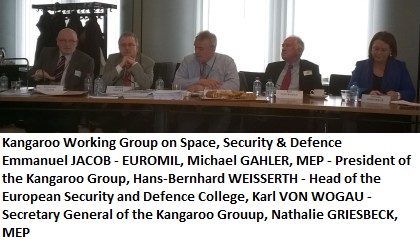 Last month, the Alliance for Lobbying Transparency and Ethics Regulation (ALTER-EU) published an evaluation of the revised EU lobby transparency register. “While some new organizations have signed up and others have improved the quality of their registrations, too many other entries continue to look problematic: confusing, unclear, inconsistent or just down-right dodgy” concludes ALTER-EU. On the arms industry lobby, ALTER-EU notes that Northrop Grumman remained completely outside the register. Several other arms industries did register their lobby activities, as can be seen on the EU transparency register website.

ASD for example, the Aerospace and Defence Industries Association of Europe, also known as the lobby organization for European arms industry, registered 16 lobbyists. Remarkably, the annual costs related to ADS lobby activities are registered as <9,999 €. It is completely unrealistic that the costs of 16 lobbyists are covered with this budget, apparently ADS is not registering correctly.

Airbus, which also registered its activity, has done better; it fully names its 10 lobbyists who work with a 400,000 € – 499,999 € budget. The register also asks to indicate which EU initiatives, policies and legislative files are followed by the lobbyists. For Airbus that is “Transatlantic issues (TTIP, WTO), Research and Technology (H2020), Aeronautics (EASA, etc.), space (Galileo, Kopernicus, etc.), security (cybersecurity), defence (prepatory action on research), company law (trade secrets, conflict minerals, etc.)”. A rather political agenda for a commercial enterprise.

The other arms companies which took the effort to register their lobby activities are BAE Systems, Diehl, Finmeccanica, Frequentis, Indra, MBDA, Rolls-Royce, Saab, Safran, Short Brothers as representative of the Bombardier group, and THALES.

Also interesting is the Kangaroo Group (“Free Movement and Security”), a body uniting MEP’s, Commission members, Council members and ‘Industry and Academia’. One of the major objectives of Kangaroo Group is to support the EU Common Security and Defence Policy. “Our working group on Security and Defence will follow the implementation of the results of the Defence Summit. This should lead to a public debate about the European interests and values we should promote and protect, and the capabilities we need to face evolving threats. This public debate may lead to a European White Paper on Security and Defence or a Strategic Concept of the European Union.” Kangaroo Group publishes papers on topics such as Expectations for the Defence Summit, for which they promote a more efficient internal market for defence, which should contribute to a ‘safe and prosperous Europe for its citizens’.

In general, the arms industry lobby is well facilitated by the European Commission (EC). Elzbieta Bienkowska, Commissioner for Internal Market, Industry, Entrepreneurship and SMEs (small and medium enterprises), launched a new high-level Group of Personalities to advise the EC on how it can support defence industry research. The European parliament blocked the direct subsidizing of arms research with European money through to the multi-annual Horizon2020 research budget, but industry and Commission are just giving it a new try with the new budget. In a PA (Preparatory Action) they will outline the steps to reach this goal.

Lobby umbrella ADS is of course represented in the Group of Personalities. According to ASD, 100% funding of defence Research & Technology must be the norm, due to the ‘monopsonic nature’ of the defence market. But research funding , writes ASD in a position paper, is not the most important. “Most important for industry in this context is market uptake: to generate new capabilities and strengthen the EDTIB (European Defence technological Industrial base), EU-funded research must lead to concrete procurement projects. This is politically and institutionally challenging, since the final customers will be national MoDs (Ministries of Defence). Therefore, the PA must explore ways to bridge this gap between EU-funded research and national procurement. This issue should be discussed in the Group of Personalities which will be set up by the EC.” With in mind the repeated failure to find costumers for a ‘eurodrone’ which after many failed attempts again found governments interested, one can clearly understand why ASD is pressing this issue.

More developments in support of the EU arms market might be expected from the June EU Council on Defence, where several ‘personalities’ will use the perceived threat of IS, Putin and desperate refugees in small boats to promote a stronger European defence industry. Airbus CEO Enders already had expressed hope that Russia’s actions in Ukraine would halt decline in European military spending, which were taking a toll on Airbus and other European weapons makers.

Enders is also one of the 16 ‘Personalities’ advising the European Commission on arms research funding, of which 9 are from defense industries.

It is remarkable that there is little to no reference to the EU Common Position on the Export of Military Technology and Material, shortly EUCP, in the industrial activities of the EC. This Common Position, which is recently reviewed and is closely followed by peace and human rights campaigners, seems to exist in a different universe. As if NGO’s can play with their Common Position and feel happy and influential, while the arms industry and EC continue to extend the support for military research and military ‘solutions’ to complicated political and economic crises.